This article is part of a 3-part series on the COVID-19 and its economic impact on Sarawakians.

The COVID-19 pandemic has brought about a series of intricate challenges – not just to Sarawak but to the world. From the implementation of strict travel restrictions both within and outside the country and a ban on mass gatherings, the closure of education institutions, all amidst the political instability which saw an unexpected change of government.

Owl & Badger Research did a quick survey to find out how much has the COVID-19 pandemic affected Sarawakians especially throughout and after the Movement Control Order (MCO) that has affected Malaysia’s economic situation. 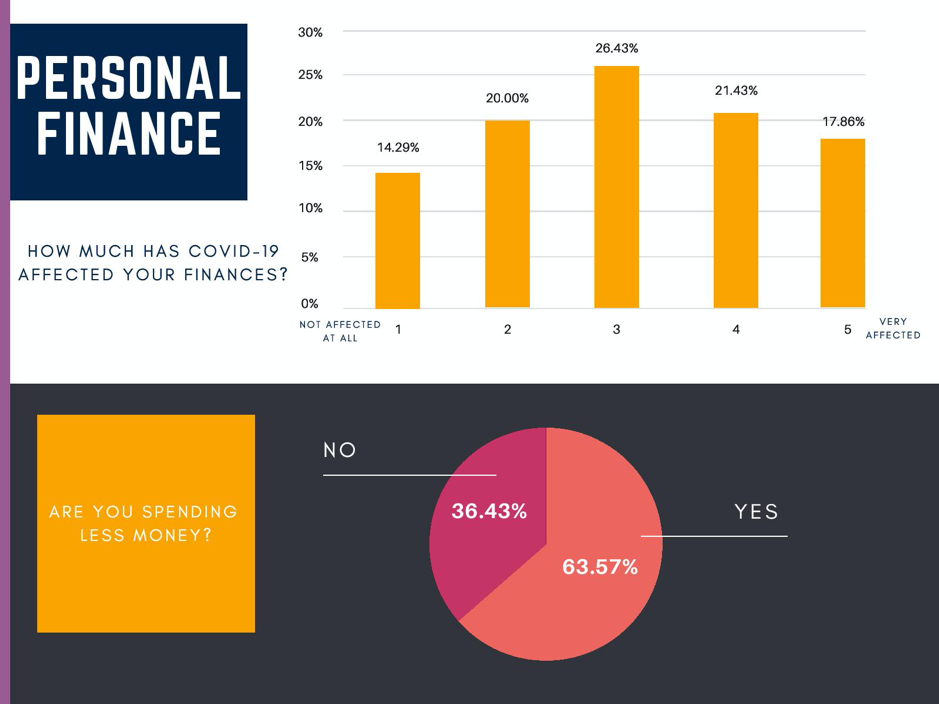 With most business activities halted for about two months since March 18, Sarawakians are reporting notable changes in their current financial situations since the onset of the COVID-19 pandemic. Our quick survey noted that COVID-19 has affected our respondents financially, driving them to spend less money and be more cautious about their spending. Respondents reported that the pandemic has moderately impacted their finances and 64% stated that they were spending less money than they used to.

As we adapt to the “new norm”, we delved into the financial implication of COVID-19 on Sarawakians and it was seen that money matters – salary, employment, debts and bills – does matter.

FINANCIAL IMPACT OF COVID-19 ACCORDING TO SARAWAKIANS
72% of our participants noted that they are, to some extend, worried about the future with most of them citing financial difficulties. These financial difficulties include losing a stable source of income or uncertainty of their salaries, the rising cost of essentials and having to spend on items they did not use or did not need to spend on before. 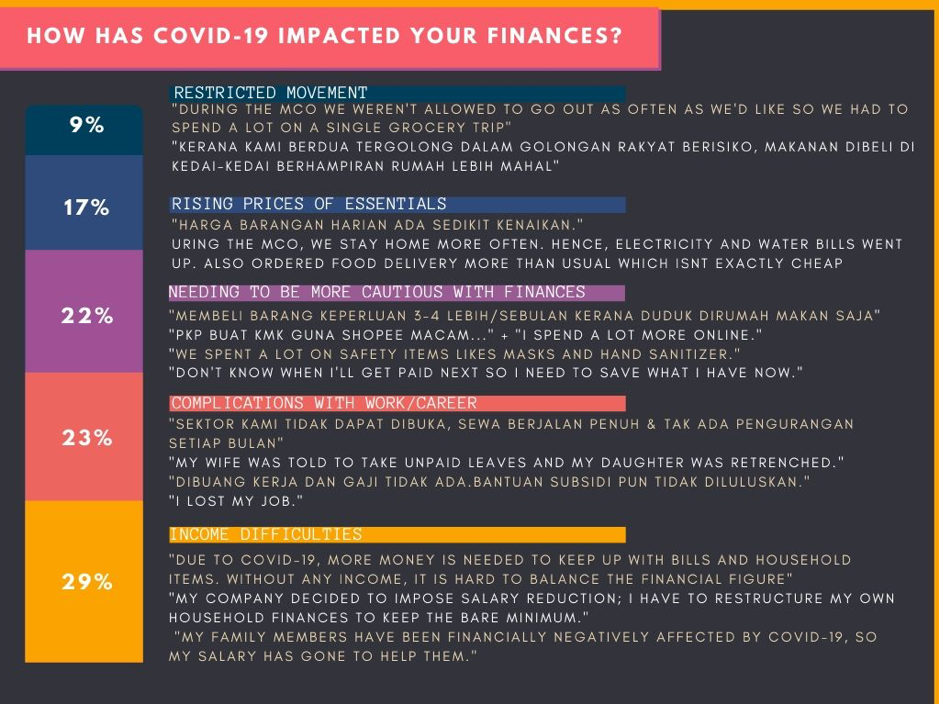 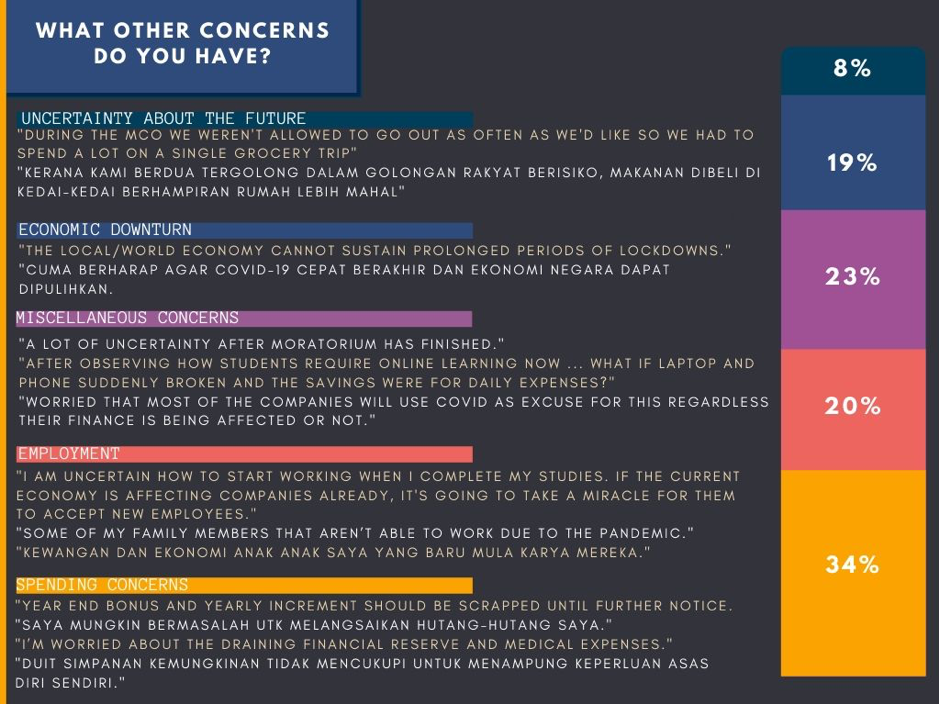 A large number of our respondents cited income as one of the biggest causes of financial difficulties.

These worries are warranted. COVID-19 has led to an economic crisis worldwide. Supply and market chains around the world are disrupted. For instance, China, which is the world’s largest producer of active pharmaceutical ingredients and home to more than 200 of Fortune’s Global 500 firms, shut down their industrial production to limit the spread of COVID-19, consequently impacting the entire chain. The World Heath Organization (WHO) had to call on industries and governments to increase manufacturing by 40% to deal with the global shortage of personal protective equipment (PPE) such as surgical masks and gloves. Notably, fashion brands such as Louis Vuitton, Zara and Prada are reopening their factories and making millions of face masks to fight the coronavirus-related shortage.

While certain companies have witnessed a surge in business due to the nature of their work (cleaning industries, online shopping and logistics) some companies are not doing too well. International companies such as construction and engineering company McDermott International, Inc., Oscar-winning French company Technicolor and Singapore-based oil trader Hin Leong are few of the the many companies that had to file for bankruptcy amid the pandemic. In Malaysia, MPH bookstores and popular video retailer Speedy announced their total or partial closure in the midst of the COVID-19 MCO.

In Sarawak, the tourism industry has been severely affected, with the Sarawak Tourism Board reducing their target of tourists to less than half of the usual 5 million tourists per annum. Despite allowing airlines to fly in at full capacity flights between Peninsular Malaysia and Sarawak, expensive flight fairs may serve as a factor as to why travellers might hesitate to book a flight over to Sarawak. During the Conditional MCO (CMCO), flight fares hit its peak with prices from Kuala Lumpur to Kuching ranging around RM2,100, although these prices have dropped to about RM400 at the time of writing. Rumours had circulated where about 100 hotels in Sarawak had closed down or were in the process of closing down. Although these numbers reflected the number of hotels that closed during the first and second phases of the MCO, according to Malaysian Association of Hotels Sarawak Chapter chairman Ibrahim Nordin, the overall hotel industry in Sarawak was still running slow at about an 8-9% occupancy rate, compared to the average 30% before the MCO period. Some hotels have chosen to remain closed past the CMCO due to the lack of demand and zero occupancy rates.

From our survey, 66% respondents noted that they had applied for financial assistance programmes, including the Bantuan Prihatin Nasional (BPN), Prihatin Plus and Bantuan Khas Sarawakku Sayang (BKSS). The BKSS package valued at RM300 million would benefit Sarawakians from petty traders and hawkers to those from B40 households, single Sarawakians above 21 and frontline workers such as the Malaysian Royal Custom, Fire and Rescue Department (Bomba) and Civil Defence Force (APM). 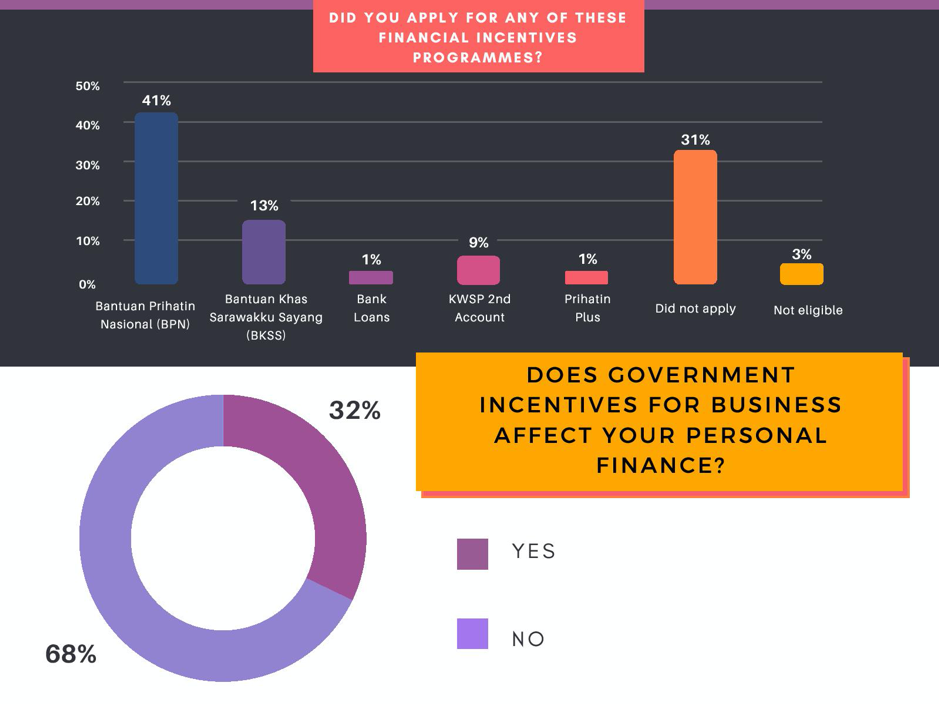 In addition to the financial incentives, financial aid was given to the disabled in Sarawak. A news report has stated that many of Sarawak’s visually-impaired and physically-handicapped people had no income during the COVID-19 outbreak period. Isak Ngau, chairman of the Society of the Blind Malaysia (Sarawak Branch) has highlighted that those involved in the massage business, playing music in the streets and producing handicrafts have suffered income lost during the MCO. According to Sarawak Welfare Minister Datuk Seri Fatimah Abdullah, a senior welfare officer has been assigned to specifically look into the plight of the blind and disabled people in urgent need of cash and food aid due to the COVID-19 outbreak.

Monetary donations from various Sarawakian conglomerates, an anonymous donation of a RM148,000 machine to detect COVID-19 in Sibu and numerous food donations have shown the resilience and selflessness of Sarawakians throughout the pandemic by going above and beyond their communities.

With 12.7M cases worldwide (as of the publication of this post) and is still growing by the day, the pandemic has sparked an unparalleled health crisis worldwide and, with it, an economic crisis. With the lost of sources of income, reduction of wages and closure of businesses, the incidence of poverty especially urban poverty is expected to increase. COVID-19 has impacted Sarawakians in general – and the full repercussions of which are still being studied. There is still major uncertainty about the extent of its impact at this stage.

In the following weeks, we will address the implications of COVID-19 on unemployment in Sarawak as well as the future of e-Commerce.

Thank You For Signing Up!

You will receive an email from us soon.

HOOT!
Have A Question?

Fill in your details and we’ll be in touch